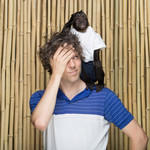 Check out the upcoming (!!!) Chk Chk Chk concert dates or sign up for tour alerts

!!! Chk Chk Chk 2016 Tour will last until October 14 winding up at Social Hall in San Francisco, CA. Earlier in September !!! are set to visit San Diego and Alhambra before moving to Seattle next month.

The latest !!! Chk Chk Chk tour setlist almost always includes such songs as All U Writers, Except Death, Ooo, One Girl/One Boy and Slyd.

The dance-punk band with an odd name !!! (most commonly pronounced like Chk Chk Chk) was created in Sacramento, California, in 1996 by lead singer Nic Offer.

How can one interprete their strange name? It can be pronounced by repeating any one-syllable percussive sound three times (e.g., "chk chk chk").

The band’s name originated from the subtitles of the movie The Gods Must Be Crazy, in which the clicking sounds of the Bushmens’ Khoisan language were represented as “!”. However, !!! may also be pronounced by repeating any one-syllable percussive sound three times. Chk Chk Chk is the most common pronunciation, but they could just as easily be called Pow Pow Pow, Bam Bam Bam, Uh Uh Uh, etc. Guys from Chk Chk Chk stand for danceable music.

Their studio album “Myth Takes” was voted #3 in the Top Electronic Albums chart in 2007 and was featured in the Billboard 200.