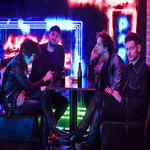 So authentic and conceptual pop-band The 1975 announced the release of the third 'Music For Cars' album.

The 1975 is a unique British band, which are due to their style and the general concept of performing music had won the reputation of the most prominent pop-band of our time. Take a look at these stylish young men, it's not possible to turn a blind eye to them, and even more not to listen to their music.

We hasten to please you with the great news as The 1975 plan to release a new album under the title "Music For Cars", which will become the third one on the band's account. It is worth mentioning that album got the title from the previous EP released in 2013. As a matter of fact, the band's latest album was "I Like It When You Sleep For You Are So Beautiful Yet So Unaware Of It", released on February 26, 2016.

Musicians have been working on 'Music For Cars' album for a long time, but they do not reveal the exact release date. However, it became known that this event will take place in 2018. It is also worth adding that on his Twitter the frontman of the The 1975 Matty Healy announced the first date of the tour - June 1, although it is possible that it is the release date of the album, who knows:

Such a good start of the summer, isn't it? The entire tracklist is not yet known. However, the title of a one of the songs from the album is probaly will look like 'jesus christ 2005 god bless america'. And again, we got this information from Matty's Healy Instagram account.

the need to start editing

See one of The 1975 most popular songs - The Sound, for which was filmed the video. Keep track of all the news in order not to miss something important.